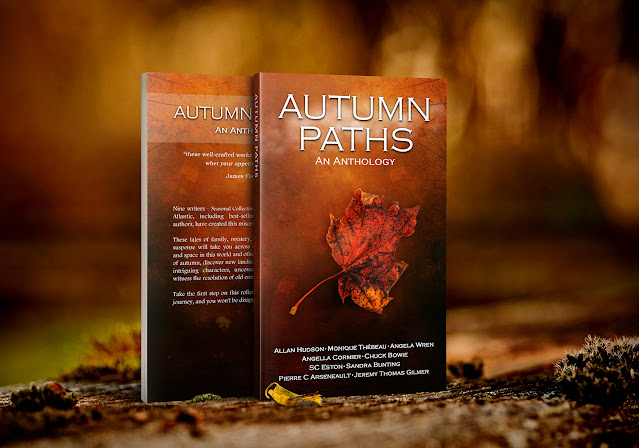 Autumn Paths
You visitors are in for a treat this week.
Lots of exciting news for the Anthology. Read about the book tour below.
Follow the rest of this post to read the beginning of each story - Teasers

The reviews are in.

**** “The authors did a wonderful job creating engaging and thought provoking stories around the central theme.” Author Sally Cronin.

**** “Each story is short enough to read during lunch break or for a quick read before turning in for the night. Author Joan Hall.

**** “Don’t let the title Autumn Paths mislead you! These snappy, well-written tales are sure to delight no matter the season.” Author MJ LaBeff.


Autumn Paths is going on a tour. Thanks to Author Angela Wren who worked diligently to bring this all together. Thanks to the participating websites for helping us share the news, reviews, excerpts & more! 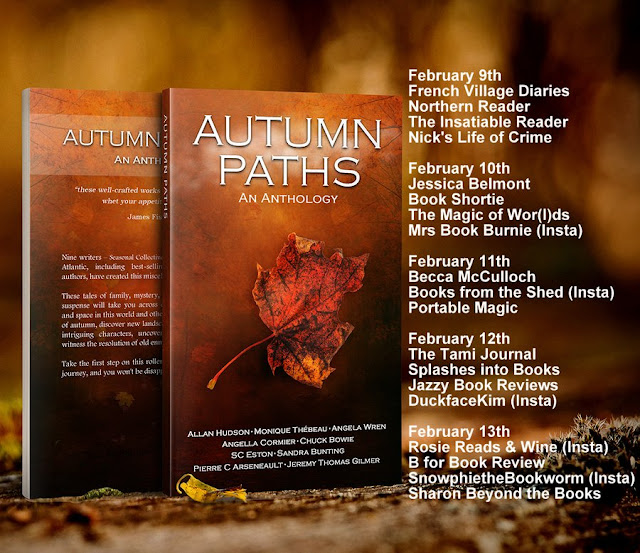 See below for URLS

All the Way Home

A FEW PEWS UP THE HAT BOUNCED, turned from side to side and ruffled slightly in the breeze that swept in from the open doors at the back. Aurèle couldn’t take his eyes off it. Some niece or other from Montreal he thought. A face was not visible, only the wisps of feathers adorning the headpiece. Others were no doubt taking in the flowers, looking at relatives from out of town in their sophisticated dress, or glancing impatiently at the door where the wedding party would soon start up the aisle. But Aurèle, with a wistful smile on his face, was fixated on the hat. It was a stunning blend of natural tan and black, at times coloured a deep purple by the church’s stained glass windows. It wasn’t that Aurèle was a follower of fashion. Not at all! With the feathers he was transported back to the woods during partridge hunting.

The Path to Redemption

THE PATH MYLES BARTLETT had worn into the old beige patterned linoleum flooring, bothered him. He couldn’t help it. He hadn’t noticed it until it was too late. His sneakers had collected gravel from outside.  And he had done something he wasn’t supposed to do; he had worn the sneakers in the house. His overbearing aunt whom he had to live with after his parents passed away, had engrained this into him at the tender age of eleven. At twelve, the insurance money from her sister’s passing was released and Roberta, his aunt had had new linoleum put in. From then on, wearing shoes in the house became an even greater offense. He couldn’t help think the scratches like he had now worn into it would have earned him a severe punishment. Probably the strap. Roberta, his childless aunt reserved the physical punishments for severe infractions only. Most times he would be sent to bed without supper or made to stand in the corner while she went about her business, ignoring the child she took reluctantly into her care. He didn’t have to wonder about her distaste for him as she said it to her friends on the very first day he came to live with her.

I’m writing a series about a thief for hire, and I’m a fan of Allan Hudson’s Drake Alexander series, about a vigilante who rights wrongs. I thought it would be fun to have the protagonists meet and interact in a short story. Would they conflict, or would they collaborate?

DRAKE ALEXANDER FOLLOWED THE PATHfrom his estate to the Cocagne Bay shoreline, the marram grass swishing against the legs of his jeans. Shorts and bathing suits weather had passed, and the fall foliage offered a clear indication that summer would not return for another year. The lyrics of a JJ Cale song refused to leave his head: ‘Crazy Mama, where you been so long,’ but a smile, as well, refused to part. He’d gotten closer with someone—Beth Stone—and a three-year adventure, a quest, really, had been concluded with success. He could now forever put to rest his life as a soldier, and focus on thoughts of marriage.

Crossing over the last, tiny dune before hitting the beach, he noted with approval the neap tide; neither so high nor low as normal tides, thanks to the combined forces of the sun and the moon. The sun sat just above the horizon and he hoped to enjoy a few moments of solitude before spending the evening alone. The previous month had been a roller coaster of events, filled with danger, but he was home, and wanted to rest. A pair of binoculars, a gift from his friend Williston, bounced gently against his deeply tanned chest, and he carried a bottle of Orin Swift Palermo and a pair of Riedel fat-bowl wine glasses.

“Family means nobody gets left behind or forgotten.”

SOMETHING IS WRONG WITH HER.Something about her mind and her thoughts. Something… about herself.

Eltaya opens her eyes, hoping that the sight of her lodge will ground her back into reality. But it doesn’t. The shiny white walls and floor feel alien. The cushioned grey chair on which she sits is stiff, rejecting her. The oval terminal balancing on a pole in front of her is blank and cold. She can’t ignore the feeling that the place belongs to someone else.

She wishes her parents and brother were here, visiting. She wishes she could visit them. More than anything, Eltaya misses the sound of her mother’s voice, a voice she hasn’t heard in over sixteen years. Her family has now been absent from her life longer than it has been in it.

At least, there is the tree.

It stands in a corner of the room, to her right, its trunk bending as it climbs along the wall and then the ceiling, until it looks down upon her. Her mother kept one like it in her apartment, although Eltaya doesn’t remember it being this tall.

September, 1981, the village of Beauregard, France

ALICE TOMLINSON STOPPED AT THE WOODEN BENCH across the road from the bar. Her suitcase neatly tucked in at her feet, she sat and lifted her face to enjoy the last vestiges of warmth from the late afternoon sun. The walk from the station, just like the interminable journey by train from Calais, had been difficult. Alice was tired and irritable, and she felt sure the pain in her left heel was a substantial blister. She quietly cursed her choice of footwear.

She glanced at her watch. “Well, twenty past three on a Friday afternoon means you’ll be in the bar, Dad.” She stood and took a firm grip of her case. “And if not, I’m sure someone will know where to find you.” Alice tossed her dark red hair back and stepped into the road. Straightening her shoulders, she adopted the determined look she always wore when negotiating a seller’s price down to the absolute minimum - she usually achieved her goal. Pausing at the open wooden door of the bar, she took a breath. The interior glass door fitted badly, and she had to give it a hefty shove to gain access.

FOURTEEN-YEAR-OLD JACOB ABBEY was born in captivity, in a manner of speaking. Not in a prison, but far worse. A fair number of people knew about it – uncles, aunts, grandparents, even teachers, for God’s sake, but it was fifty-two-year-old janitor, Lesley Longfellow, who took it upon himself to set him free. Lesley was easy to spot in the school, rising above the crowded hallways like a cattle-god watching over his pasture, his balding head a beacon of light even on cloudy days. It was the day after Victoria Day, and exactly two months after Jacob had lost his mother to ovarian cancer. Lesley had taken the day off and driven, with the stamina and determination of his younger self, to the Heartland Farms on the outskirts of town. His mission was simple. Take Jacob away from his narcissist and alcoholic father.

WE STOOD, WE TWO, UP ON TOP OF THE GAIN, the hill that overlooked the rough cut of the bay below us, and we watched the sparrows hook and meander on those cold winds, and I thought of what those winds would bring. Devlin was a few winters older than me, how many neither of us knew, but a few at least. He wore those years like he wore the sash around his shoulder, the hard blue of it marking him as a man of our tribe, a watcher and a protector. We watched the sparrows swoop and we marvelled at their speed and freedom, their rightful claim to that air over our heads, lost to us, leaving us on the hard ground to fend for ourselves.

Dev took his eyes from those flyers, and I watched him as he looked to the horizon, the grey blue meeting the blue grey. He squinted into it and the paint across his temples disappeared in the wrinkles. A few of our people’s teaches lay down in the low ground, the thatched roofs looked so fragile from way up here. They were so warm and dark at night, quieting the world outside to the sound of wind off the ocean. My coat was only just fighting off this wind and I wished for the warm glow and slow fire that night would bring. Dev clicked his tongue, and we were off, down the gain.

EVERYBODY CALLS HIM FRECKLES. Can’t be helped. His face is cheerfully covered with them. Tiny spots of Irish blood spread across his upper cheeks and splattered on his nose. With the red hair and green eyes, the girls at school say he’s cute. To an eleven-year-old boy, being classified as cute in front of his friends is not a compliment. The boys tease him. Call him Cutie. At least until they tire of it. Mary Ellen doesn’t tease him. She’s not a boy, but she’s one of the boys, and with her short hair, is often mistaken for a boy. She doesn’t care, and he tries to be like her and not let things bother him. The only other one who doesn’t call him Cutie is Ducker, their leader.

Right now, Ducker is standing on the side of the road, near a brook that gurgles under the wide culvert they are gathered on. It’s a dirt road, rutted from the rain last week but now as dry as the Gobi and just as dusty. The brown trim around the bottom of their jeans and covering their sneakers shows how parched the ground is. A path, narrow and cupped from years of meandering feet, follows the brook.

A BIRD CHIRPED SEVERAL HIGH-PITCHED BURSTS AS A WARNING CALL. The female was sounding off to the predators who came too close to her nest. The hatchlings had been startled. It was an animal's nature to be fully in the present, ever aware of the dangers that could appear at any moment. The pair in the woods, their assumed predators, had been identified and warned as soon as they came too close.

Humans are a completely different kind of species. They don't always live fully in the moment. The pain that can bring runs much, much deeper than any predatory threat or attack. The lucky few learn that sometimes, the past is best left alone. 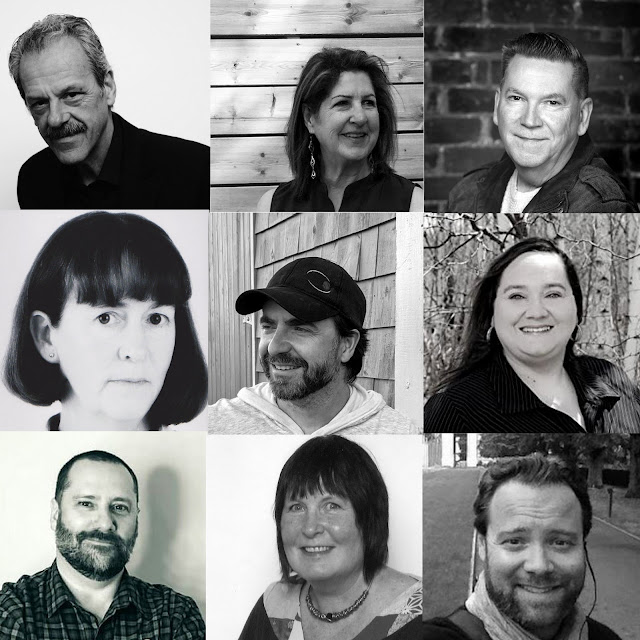 Get you copy HERE.

I am humbled to be part of this clever collaboration with authors I respect and admire.

Thank you for visiting. 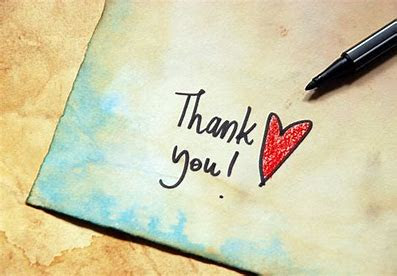