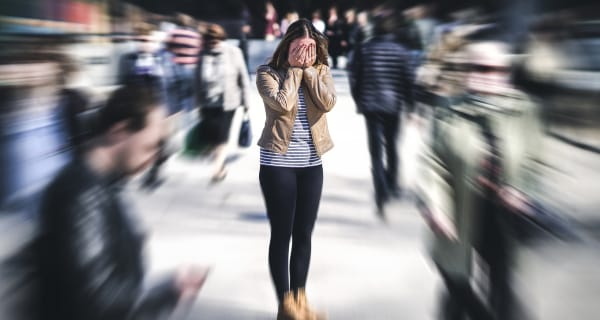 As weve seen on this site, vulnerable communication is the solution for finding a healthy relationship and happy life. At a glance, most treat vulnerability as if it is something every person can do. Many believe that if the person sets their mind to it, they can get their needs met in a healthy manner. Unfortunately, this is only the case for secure individuals.

Secure individuals are capable of expressing themselves and regulating their emotions because they believe they are worthy of love and affection. They expect their partners to be responsive and caring. Its easy to see that having such beliefs can lead on to not become overwhelmed as easily. Secure individuals have no issue communicating their needs to their significant other.

The problem is that insecure people -my previous self included- struggle to get in touch with what is really bothering them. Once the emotional floodgates open, its easy to become overwhelmed. These can create irrational thoughts, which can end in a person lashing out.

Meet Tyler. Tyler works at an aerospace company and is currently dating Terra. Like any other average anxious attachment type, Tyler is madly in love with Terra. Terra, who is an avoidant loves Tyler as well -but she calls him crazy for his weird behavior. Sometimes when Tyler gets off work he shows up at Terras apartment not to surprise her, but to check on her. To make sure she isnt cheating. Like most anxious people, Tyler perceives his relationship with Terra as fragile. Hes obsessed with making sure it works.

Moments later he asks his boss if he can leave. He tells his boss his girlfriend is sick, and needed to go to the hospital.

These thoughts are just illusions, but the more he thinks about them, the more anxiety builds up. The more real they feel. The thoughts of what she might be doing is like being punched in the face over and over. Shes cheating. Uppercut. Maybe shes telling someone else she loves him. Left hook. Shes probably laughing at how stupid he is while shes been sleeping behind his back all this time. One-two combo.

This fear and anxiety is a product of his childhood relationship with his mother. Flash back to fifteen years ago. Tylers mom, Susan, was inconsistently responsive to Tyler. Sometimes when he cried and needed attention his mother was there. Other times, she would just ignore him because she had her own agenda that she needed to tend to.

As a result, this formed Tylers emotional blueprint of how relationships are supposed to be. This blueprint guides behavior and suggests what and how things should be done. When Tyler didnt get his needs met through asking in a healthy way, he started to feel emotionally neglected. He felt a low sense of control over the love and affection he wanted to receive.

As these feelings of inadequacy and uncertainty were building up immense emotional pressure, the anxiety swirled throughout his little body. It was so overwhelming that Tyler had to do something. So he packed up his kindergarten backpack with his favorite Batman underwear, a pair of Nike socks and his GI Joe Commander Duke. He walked into his moms room with tears streaming down his face and told her he was running away.

Okay, she said. Have fun living on your own.

Tyler couldnt believe it. His mother didnt give two shits about him. He was worth nothing to her.

He felt sick. Alone. The world was heartless. His solo life began when he walked out of the front door. The pressure to fend for himself crushed him. He walked three blocks and then climbed up his favorite tree to cry his heart out.

Its easy to tell from this life experience why Tyler became anxious and fearful about finding security. This experience hardened the belief that his relationships were fragile, and that any normal level of communication was not enough to gain the reassurance of love Tyler needed.

Experiences like these lead an individual to perceiving themselves as having low-worth. As a result they have low social self-confidence, they lack assertiveness, and they believe they have little control over their life.

Flash back to today. Tyler shows up at Terras apartment. He is screaming at her to come out. He is calling her names, and the neighbors are beginning to notice.

Terra comes outside and tells him to leave. He threatens to leave her in response, even though hes only saying it in a desperate hope of gaining reassurance from her.

Tyler has entered into a Vicious Anxious cycle. 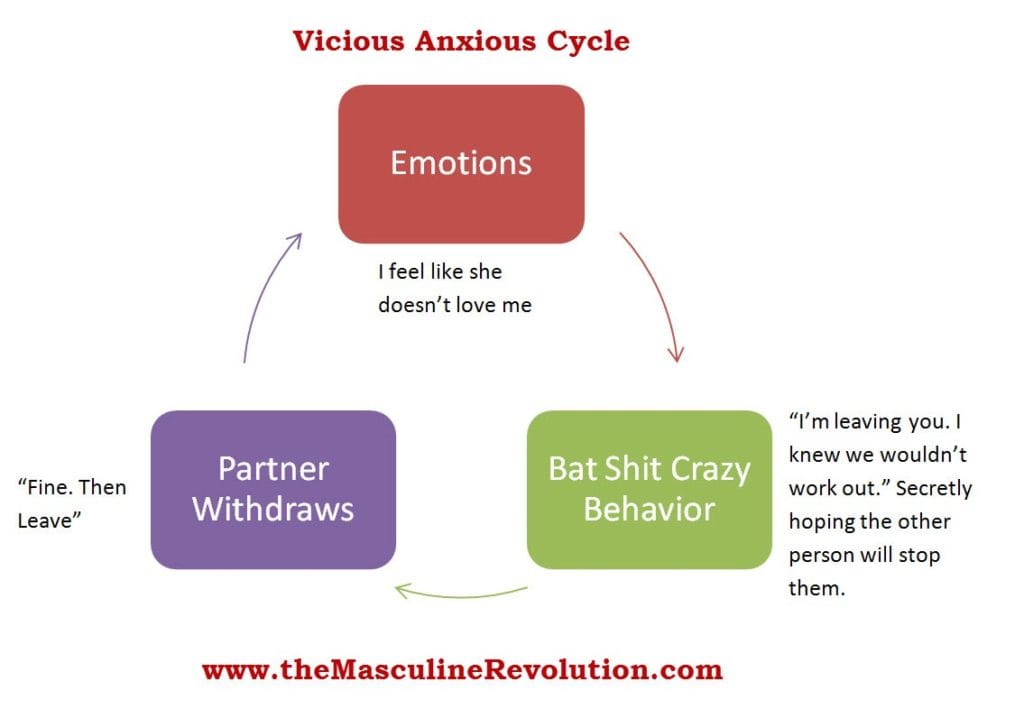 Unfortunately Tylers way of expressing his needs by threatening to leave has pushed his partner away. Understandably, his crazy behavior causes Terra to withdraw.

As a result, Tylers emotions build up even more. Just like they did with his mother in kindergarten.

Such behavior doesnt always end in a breakup. This batshit crazy behavior may cause two reactions out of Terra. She may call it off with Tyler. Shes had enough of his shit.

If she does end the relationship, Tyler is left wondering if she was cheating, or if she left him for being too clingy, or if she felt they just werent right for each other.

If Terra does respond or give in to reassuring him, Tyler will never know if she is just responding to the batshit crazy behavior, or if she actually loves him. This makes it even harder and more confusing for Tyler.

Any anxious person talking this path will never figure out if their significant other is answering their real concern whether s/he cares enough to listen to your worries, reassure you, and make you feel safe and loved.

If youre an anxious person, you probably crave a way to get out of feeling all of this inadequacy, shame and anxiety. I know I did. 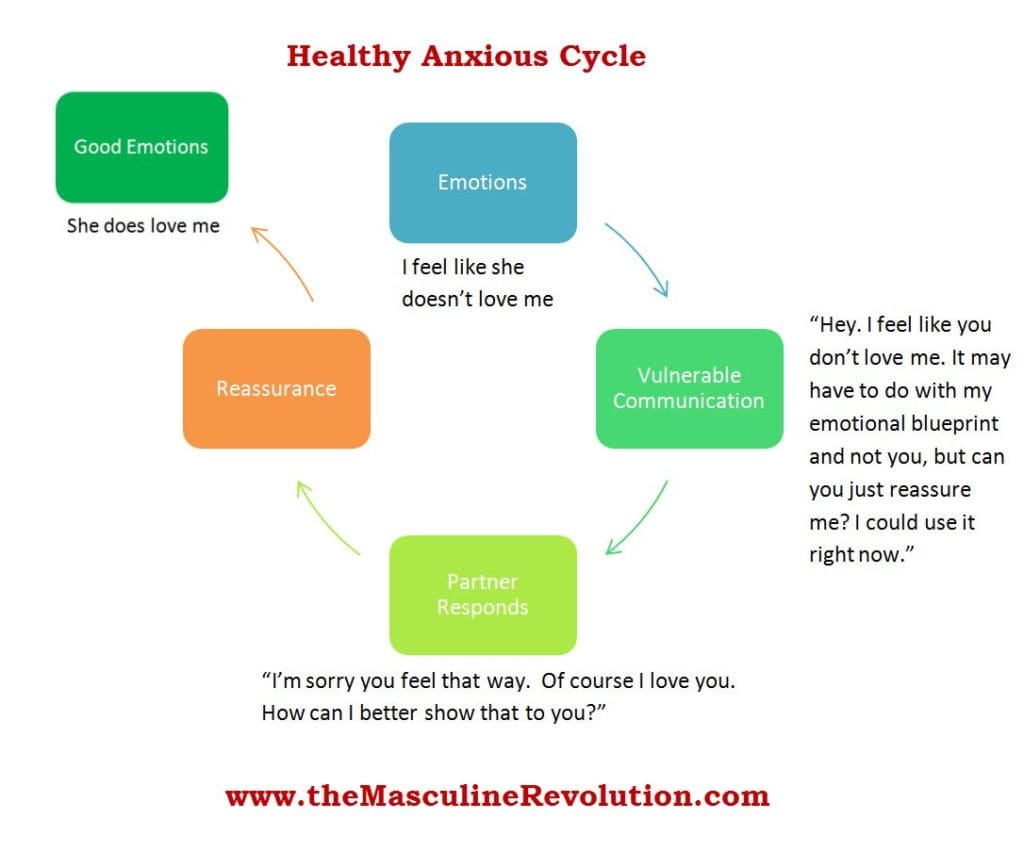 The way to get out of this toxic relationship is to use vulnerable communication.

Lets change the introduction to the story. Lets Imagine that Tyler texts Terra and speaks honestly about his feelings. Hey. I feel insecure and unloved, and I could really use some reassurance. Tyler reassures her that this feeling has nothing to do with her, but rather how he has been conditioned to perceive relationships. How do you think Terra would respond in this case?

Most likely, Tylers vulnerable communication would encourage Terra to help meet his needs. He isnt attacking her. He isnt threatening her. He is just telling her how he feels, and asking for reassurance. Despite most people finding this a needy characteristic, such emotional mastery is actually a massive turn-on. It shows maturity and courage. Terra will most likely respond kindly and give Tyler the reassurance he needs. It may not be right away since its through texting, but once she does respond she will comfort him and be there. Thats all Tyler needed.

Despite the biological fear of getting hurt, take a leap of faith when your emotions build up. Avoid using batshit crazy behavior. Instead, use vulnerable communication.

Step 1: Before you act, ask yourself this question: Would Kyle Benson tell you its bashit crazy behavior? texting excessively, threatening or trying to make your partner jealous all count.

Step 2: Communicate your anxious feelings to your partner in a non-accusatory, vulnerable way.

I wouldnt want to avoid the avoidants, now would I? Avoidant attachment-style individuals tend to be unaware of their need for distance and space. As an avoidant, you crave a need for space, a need to run away, yet you dont understand why.

Terra, who is still dating Tyler, just got fired from her job. Tyler, who is an anxious attachment person, immediately overwhelmed her with new job opportunities and connections. Despite knowing that Tyler is doing this out of love, she feels a need to escape, a need to breathe. Shes actually associating this craving for space as a signal that she just isnt that attracted to Tyler.

Theres no point in talking about this to Tyler, because it feels so obvious that he is not The One. So Terra ends it.

This is her 9th failed relationship.

Most avoidants that have attachment issues with intimacy actually lump them in a toxic cycle of failed relationships.

The way to get out of this toxic, fulfilling cycle is to use vulnerable communication.

Step 1: Recognize the need for physical or emotional space.

Step 2: Communicate that need to your partner. If you can, do so early in the relationship before the feeling happens. Doing so not only sets healthy expectations and respects each others needs and boundaries but also lets your partner know that your need for space has nothing to do with them. In turn, this will also calm their attachment style.

If your partner is not responsive within a reasonable time, dump them and go find someone who will. You deserve to be loved and have a healthy relationship where you get your needs met. Not to mention asserting yourself vulnerably actually builds self-esteem and self-confidence, and provides one a greater sense of control.

Isnt that how you want to feel about yourself and your relationships?

A version of this post was previously published on KyleBenson and is republished here with permission from the author.

Talk to you soon.

If you believe in the work we are doing here at The Good Men Project and want to join our calls on a regular basis, please join us as a Premium Member, today.

All Premium Members get to view The Good Men Project with NO ADS.

Need more info? A complete list of benefits is here.

The post Why Insecure People Struggle with Vulnerability appeared first on The Good Men Project.