As any avid camper will know, there arent always decent, setup places to have a true shower in most campgrounds and tent sites. That doesnt mean, however, that youhave to bathe in the lake every time you want to rinse off. There are plenty of options out there when it comes to portable showers that you can hang up and use like an outdoor version of your shower at home, but not everyone loves the idea of showering in the open air. We decided wed like some privacy for showering and changing on our next trip since well be with friends, so weve been scouring the Internet for the different kinds of shower and privacy tents that are out there!

By the time wed made a decision, wed gathered a pretty decent list of quality options, so we decided to share the best ones for other camping enthusiasts to see as well. Check out the nine best pop up shower tents for camping that we came across in our search! 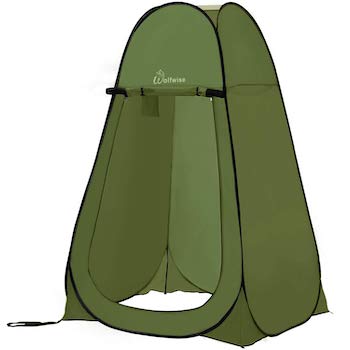 Are you the kind of camper who only goes for small amounts of time in each place and moves around a lot from site to site? Then perhaps youll get a kick out of this super easy to use design from WolfWise!

Rather than being set up with poles and separate pieces, this particular privacy and shower tent works as a pop-up, unfolding itself in one piece to stand upright. It features a zipping door that can be rolled all the way up if need be and youll find a strap on each corner at the bottom where you can anchor the tent down for the times that youare staying in once place for a little longer. 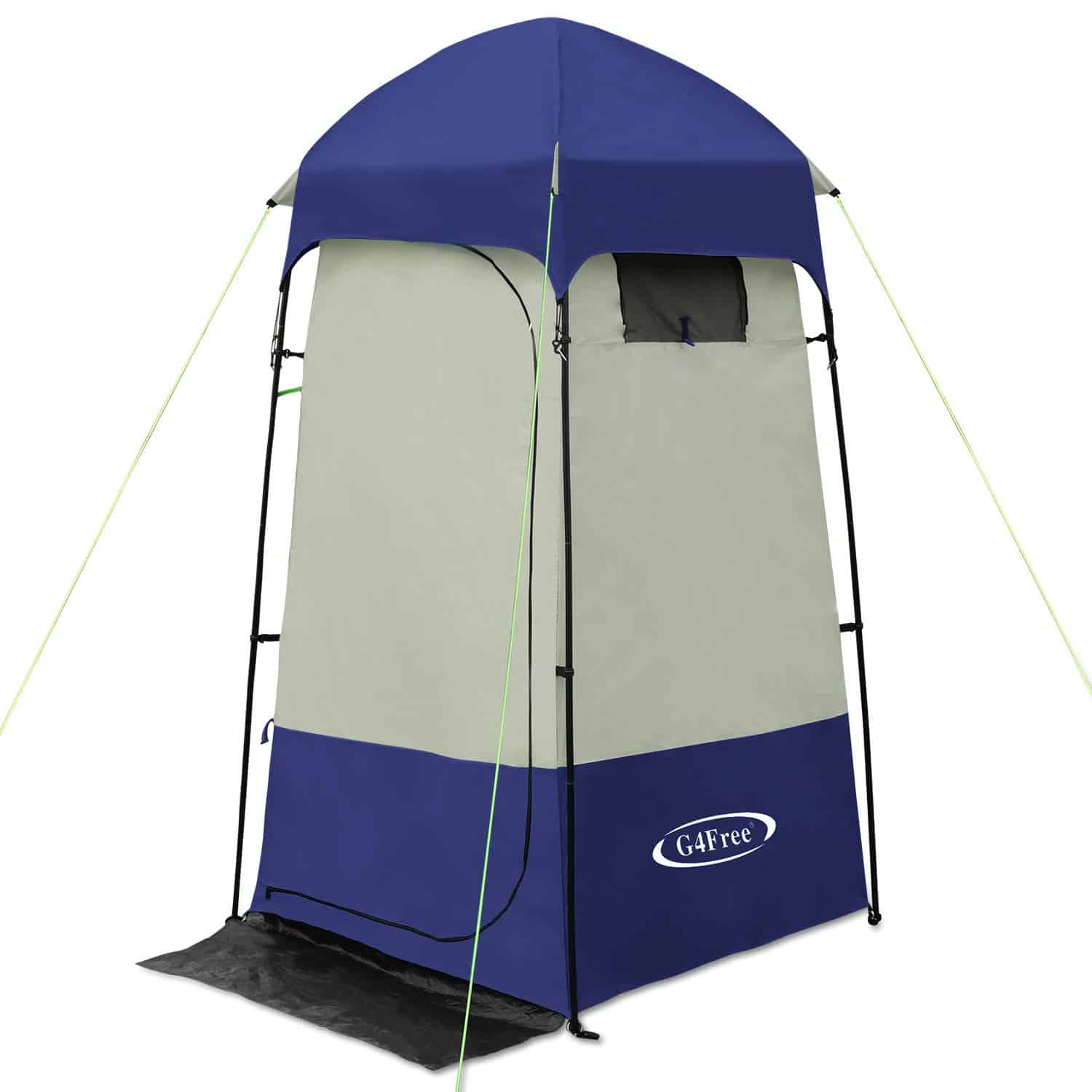 Are you more of a longterm camper who likes to stay in one place for quite a while, really enjoying your surroundings? Then we think you might prefer something a little more solid, like this privacy tent fromG4Free.

This tent is a little more of an investment, as its a little more costly, but thats to account for how well built and durable it is in terms of its materiality and structure. Its also designed to be wind and weather resistant, shaped so that the edges dont catch the breeze and the roof will run off without leaking into the tent in the event that it rains. That might not matter much if youre actually planning to use this as a shower tent, but some people just use these for change rooms, in which case they wouldnt want water pouring in. 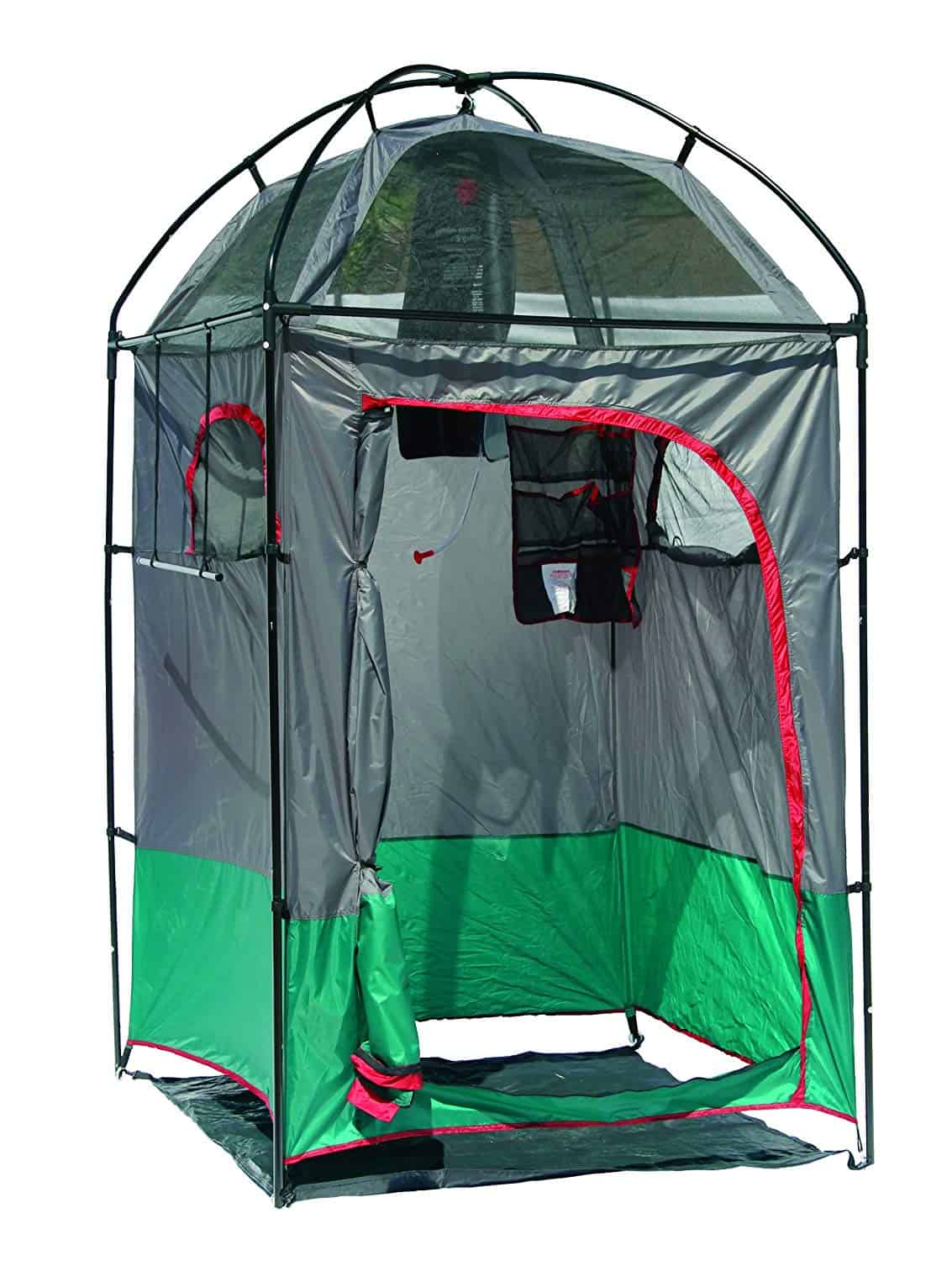 Are you absolutely certain that youre going to use your tent as a shower, so youre looking for something specifically aimed at that rather than getting a more general, multi-purpose tent? Then wed suggest checking out this specifically designed shower tent fromTexsport!

This tent is built with a hook in the top for hanging portable camping showers, netted windows in the top to keep some air circulation, and even a space at the bottom to let the water run out, keeping it from puddling in the bottom of the end. Even so, it still comes with a clipping mat for the bottom so you have something to stand in besides wet grass while you shower. 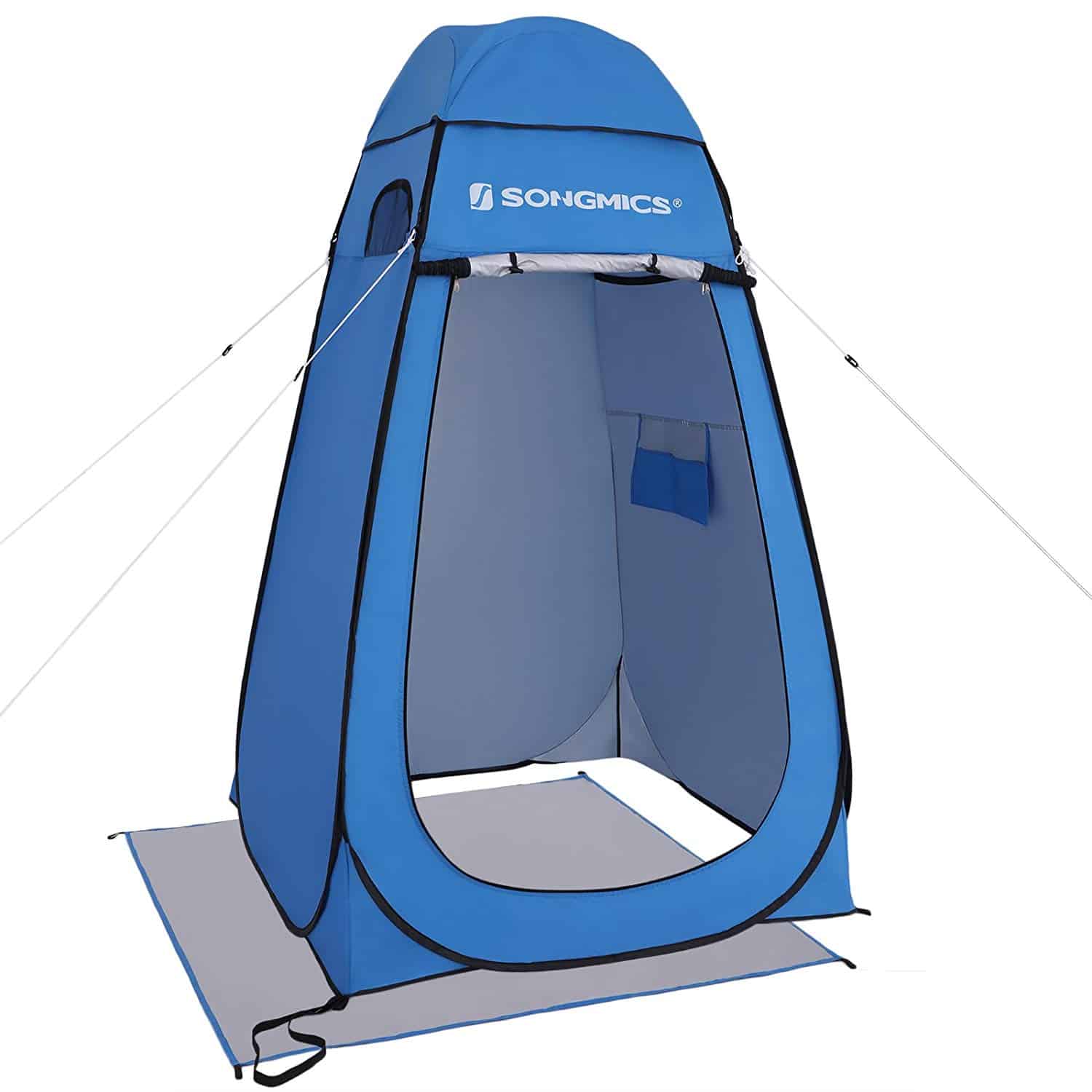 Are you actually still thinking about how much you liked the pop-up design we showed you earlier but youdo intent to have it set up in one place at certain points on your trip for quite a while? Then we think you might appreciate the features that this tent fromSongmics comes with.

Although this designis the kind of quick-built tent that you can pop right out of the bag and fold right back down quite quickly, it can also be anchored down like the more permanent designs youve seen elsewhere. For an affordable price, you also get a mat that will go under the tent between you and the grass, plus youll get support strings that spike into the ground just like a sleeping tent in order to stabilize the tent on windy days. 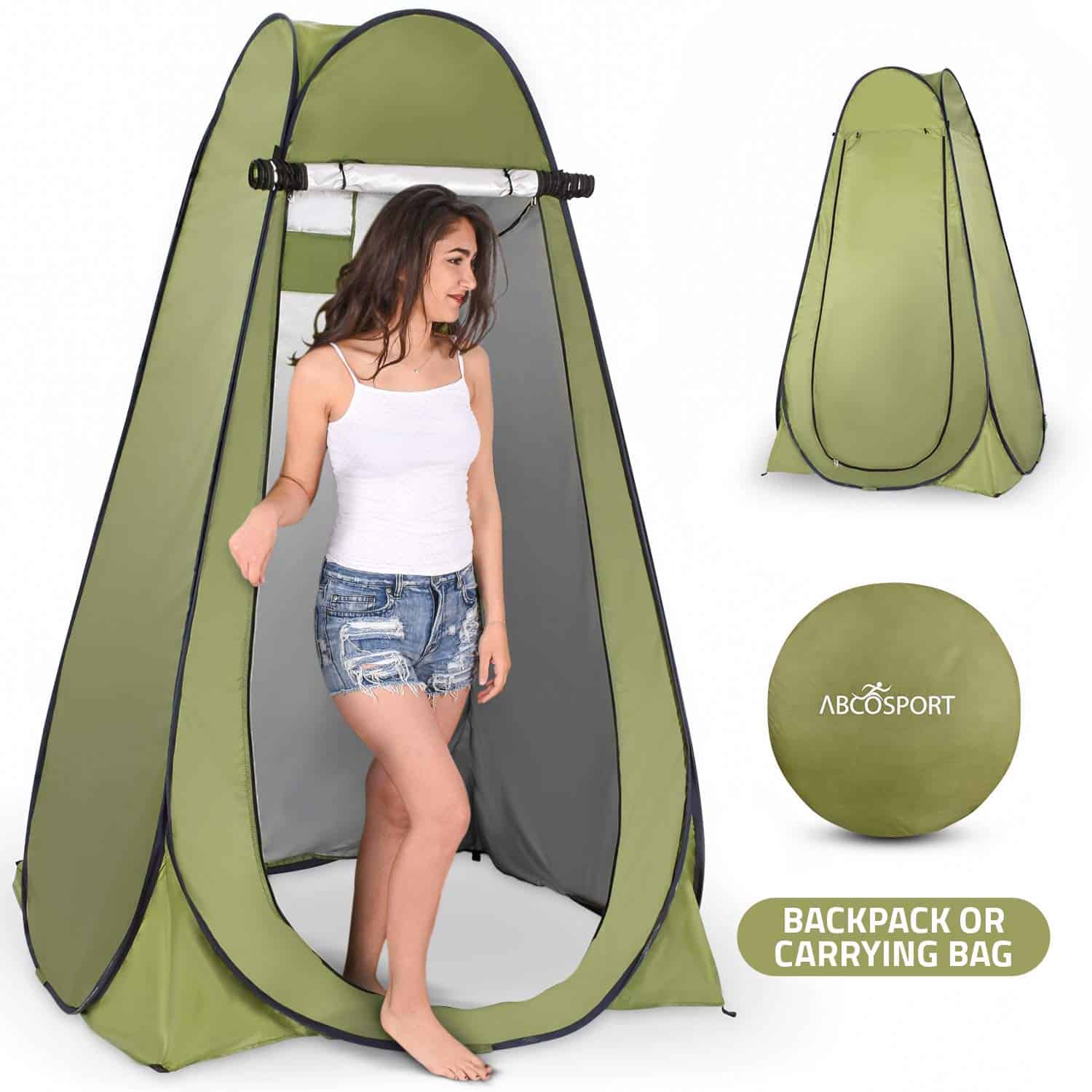 Did you feel quite partial to the very first tent we showed you but you cant help wishing it was a little bit bigger, at least at the base? Then we think this design fromAbco Tech might be a little more for you.

For a completely reasonable price compared to the similar tents on this list, you get a tent that has a little more square footage and an open bottom for those whodo want to have that natural bottom, rather than covering it with a mat. Like the other one, this design also breaks down nice and small and is light to carry. 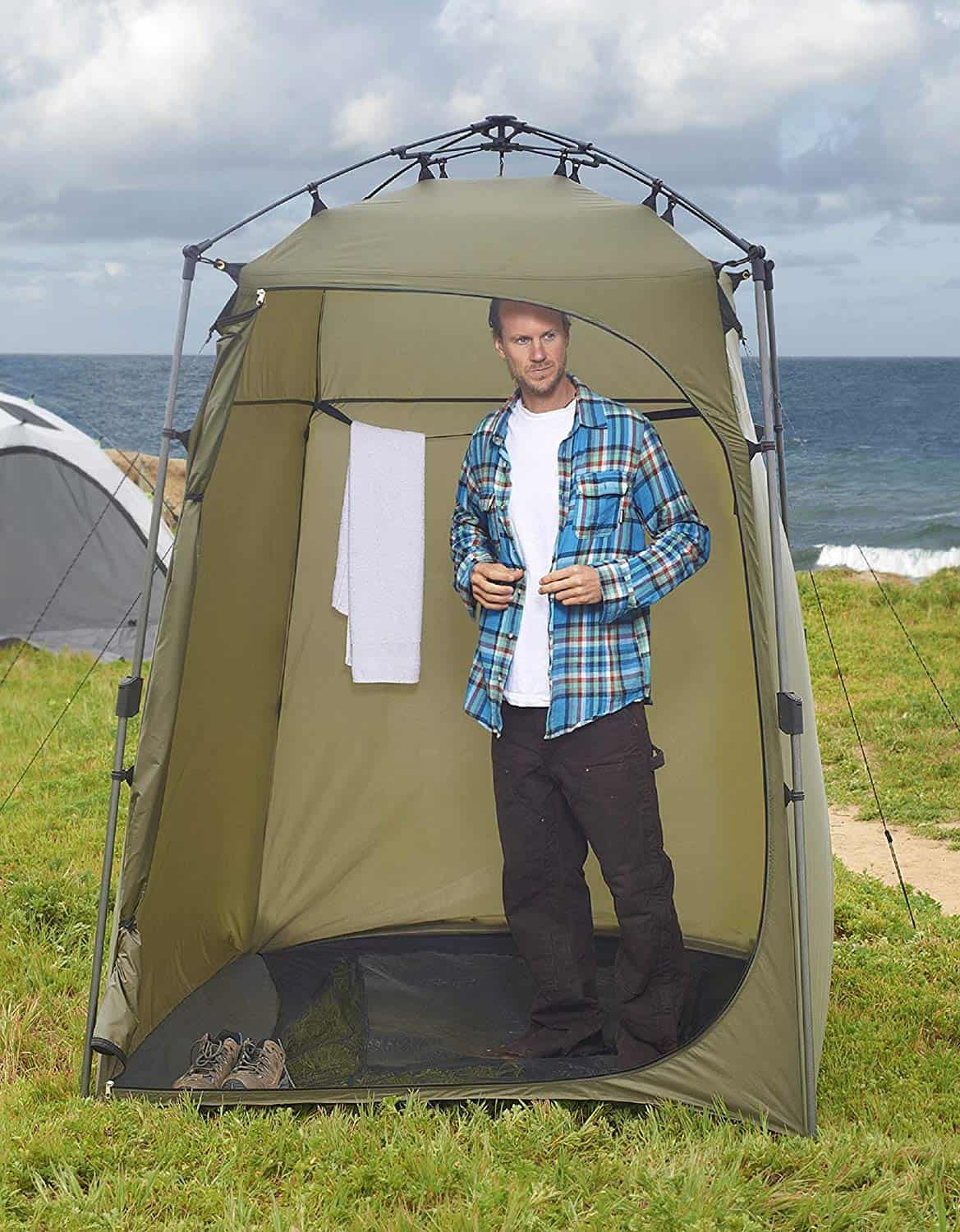 Are you really interested in this whole idea of having a multi-purpose tent that you can use as a camp showeror something else, like a change room, but youre youd prefer aneven larger model than any of the options youve seen so far? Then check out this design from Lightspeed Outdoors!

Besides having a larger width all round, this change room and shower also has a wider door, rather than tapering in places so that you have to watch the edges getting in and out. Additionally, this design has a much more durable design for camping in difficult climates, with stronger than average poles down each stabilizing side. Finally, its got two netted, vent style windows in the top that let a bit of air in and allow you to see the sky while youre showering. 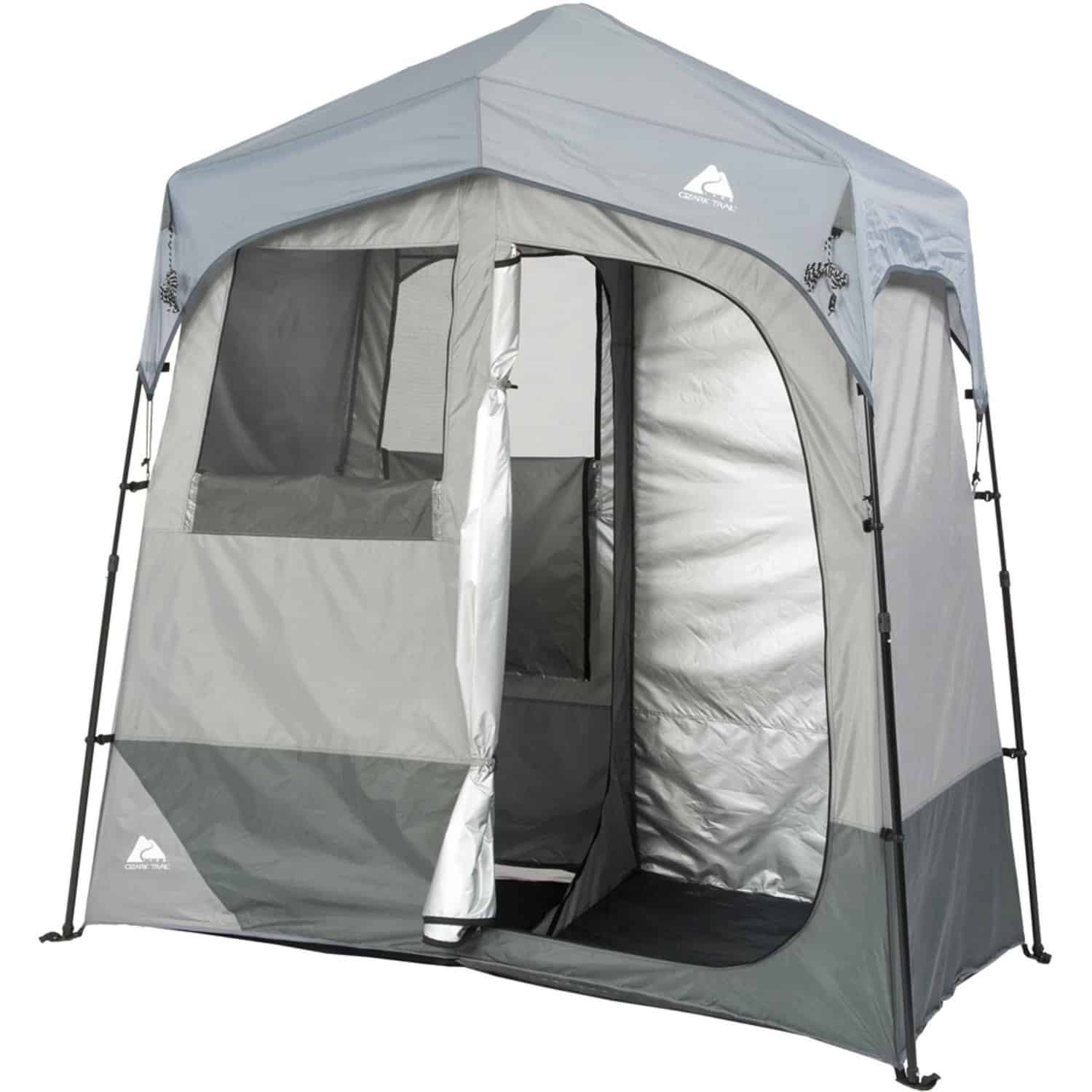 Are you actually camping with such a big party that you think you might need more than one shower or change room if your only option is the single ones that youve seen so far? In that case, we think you simply must take a look at this larger alternative option from Ozark!

Rather than just being wider for a slightly larger setup, this design gives you a double-wide space thats actually separated entirely into two rooms. This means two people could change at once, one in either side, or that you could reserve one side for the shower and one side as a dry change room thanks to the division down the centre. This design is slightly more of an investment than some of the others on the list, but not by much considering that its literally double the size. 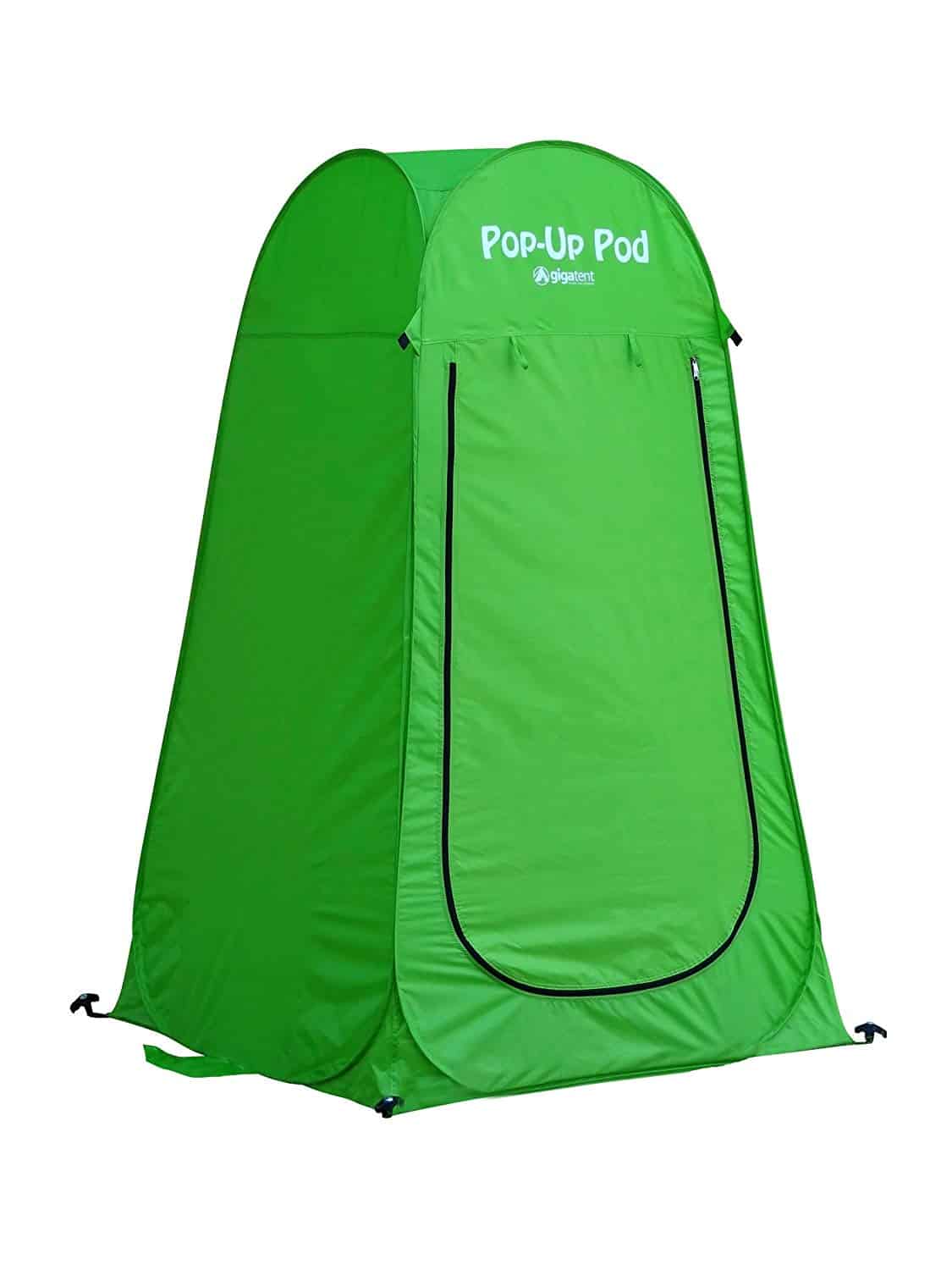 Are you still determined to find a larger design but, rather than having a whole double-wide setup that you have to put up and break down each time you move sites, youre still feeling most intrigued by the idea of purchasing a popup design? Then were pretty sureGigaTent has precisely what youre looking for!

This design is much the same as the previous pop-up options we showed you, except that its the biggest option of that kind so far. Its durable, waterproof so that rain wont get in if you use it as a change room and water wont spray everywhere if you use it as a shower, and this particular version is also quite tall. 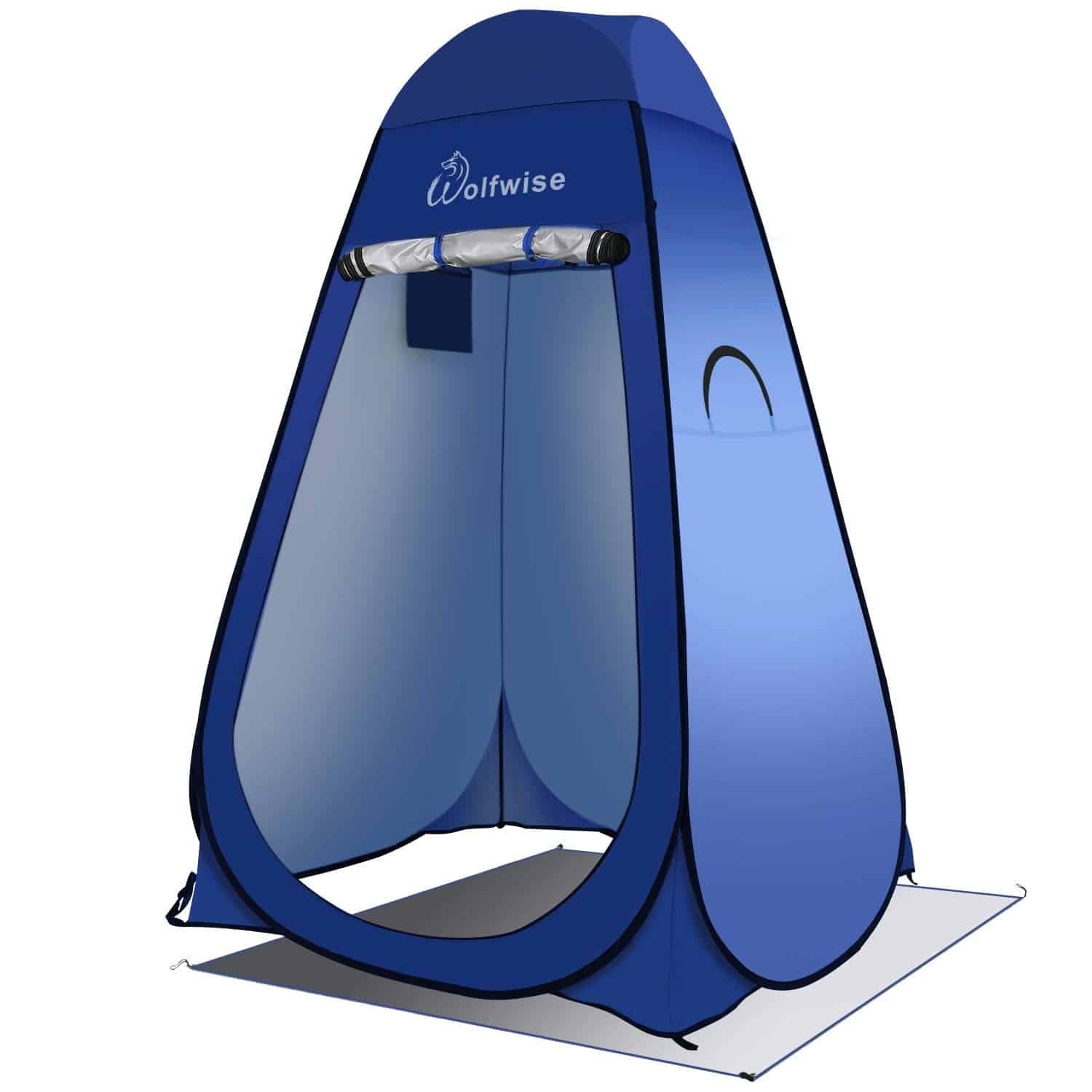 Are you feeling quite interested indeed in the whole concept of the piece you buy being a possible camping shower but also potentially many other things, including a useful piece for your frequent summer trips to the beach? Then we have a sneaking suspicion youll appreciate some of the characteristics of this tent fromWolfWise!

In particular, we were drawn to this tent for its UV resistance. No matter where you set it up or how you use it- whether youve got a sunny spot on your campsite for a shower or you plan to use it as a temporary shelter on the beach- the tent will avoid becoming very bright and heating up inside, which is a great feature in warm weather.

Do you know another DIY enthusiast who has been thinking about investing in a new pop up camping shower of some kind but feels like they could use a little more guidance? Share this post with them so they have all kinds of options and information to work with!

The post The Best Shower Tents For Camping appeared first on DIYs.com.