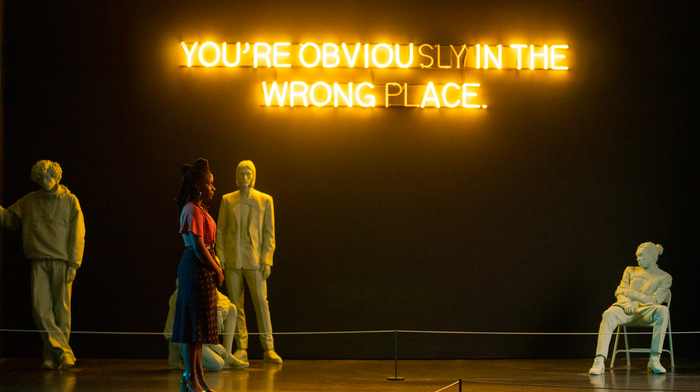 The new Candyman movie is almost here, which means you can expect the marketing to kick into overdrive. For example: a neat new featurette just arrived, taking us behind the scenes of the Nia DaCosta-directed movie and showcasing the art and artists used therein. Yahya Abdul-Mateen II plays a visual artist in the film, and the filmmakers decided it was critical to bring in real art from real artists.

In Candyman, Yahya Abdul-Mateen II plays a flashy young artist and his girlfriend, played by Teyonah Parris, is a gallery owner – which means the art world plays a big part in the upcoming horror film. Rather than just fake it until they made it, the team behind Candyman decided to turn to real artists for some of the film’s artwork. As producer Ian Cooper says in the video above, “It seemed critical that there [were] actual artists in the film, and works that had social relevancy.”

One of the artists highlighted here is Arnold Kemp, who says it was important to give his best work to the film. You can check out Kemp’s personal site right here.

So what is Candyman? Despite the title, this isn’t a remake of the original movie. Instead, it’s a sequel (sequels using the first film’s title are becoming more and more commonplace; the next one to do it will be the new Scream). The film even brings back characters from the first film. For instance, Yahya Abdul-Mateen II’s character Anthony was actually seen as a baby in the original movie.

For as long as residents can remember, the housing projects of Chicago’s Cabrini-Green neighborhood were terrorized by a word-of-mouth ghost story about a supernatural killer with a hook for a hand, easily summoned by those daring to repeat his name five times into a mirror. In present day, a decade after the last of the Cabrini towers were torn down, visual artist Anthony McCoy (Emmy winner Yahya Abdul-Mateen II; Watchmen, Us) and his partner, gallery director Brianna Cartwright (Teyonah Parris; If Beale Street Could Talk, WandaVision), move into a luxury loft condo in Cabrini, now gentrified beyond recognition and inhabited by upwardly mobile millennials.

With Anthony’s painting career on the brink of stalling, a chance encounter with a Cabrini-Green old-timer (COLMAN DOMINGO;?Zola, Ma Rainey’s Black Bottom) exposes Anthony to the horrific true story behind Candyman. Anxious to maintain his status in the Chicago art world, and spurred on by his white art dealer, Anthony begins to explore these macabre details in his studio as fresh inspiration for paintings, unknowingly opening a door to a complex past that unravels his own sanity and unleashes a terrifying wave of violence that puts him on a collision course with destiny.

The post ‘Candyman’ Featurette Shows Off the Art and Artists Whose Work is Showcased in the Film appeared first on /Film.