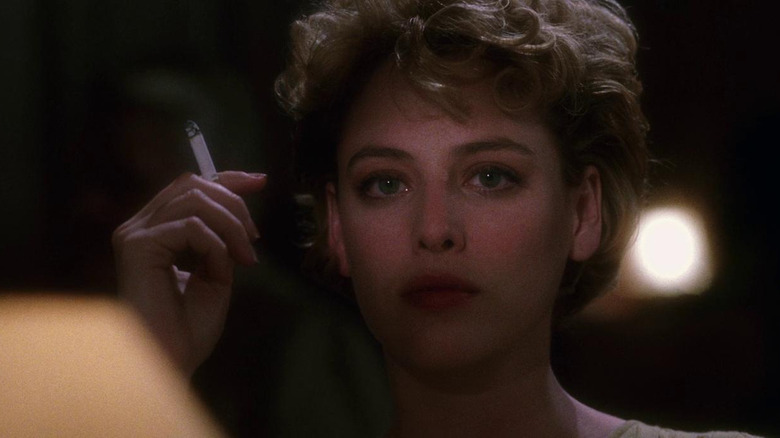 One neat detail of the new "Candyman" movie is how it continues the legend that was introduced in the first movie, and shows how it changed over time. The best example of this is the case of Helen Lyle, the main character of the original "Candyman" who has now become part of the legend herself. In a newly released "Candyman" clip, we learn how Helen's story has been altered from what we saw in the original film and repackaged to fit the ever-changing Candyman mythology.

In the 1992 "Candyman," grad student Helen Lyle, played by Virginia Madsen, started investigating the legend of Candyman. The investigation turned out to be a big mistake because it ended up costing Helen her life -- she died in a bonfire, but not after saving a baby that Candyman was hoping to sacrifice. The end of the original "Candyman" featured the residents of Chicago housing project Cabrini-Green honoring Helen as a hero and attending her funeral. However, this type of sensational story is bound to warp and bend over time, and sure enough, this clip from the new "Candyman" has an alternate version of events. Over the years, Helen has been transformed from a heroic victim into a monster -- people believe she went nuts and killed several people, even though anyone who saw the original movie knows the real killer is Candyman.

It's a truly neat idea to have the story become altered over time, because that feels like something that would truly happen in the real world. On top of that, rather than just give us a traditional flashback, director Nia DaCosta has turned to the performance collective known as Manual Cinema to create some gorgeous, haunting shadow puppets to relay past events. It's a great stylistic choice and the shadow puppetry is one of my favorite things about the movie.

For as long as residents can remember, the housing projects of Chicago's Cabrini-Green neighborhood were terrorized by a word-of-mouth ghost story about a supernatural killer with a hook for a hand, easily summoned by those daring to repeat his name five times into a mirror. In present day, a decade after the last of the Cabrini towers were torn down, visual artist Anthony McCoy (Emmy winner Yahya Abdul-Mateen II; Watchmen, Us) and his partner, gallery director Brianna Cartwright (Teyonah Parris; If Beale Street Could Talk, WandaVision), move into a luxury loft condo in Cabrini, now gentrified beyond recognition and inhabited by upwardly mobile millennials. With Anthony's painting career on the brink of stalling, a chance encounter with a Cabrini-Green old-timer (COLMAN DOMINGO; Zola, Ma Rainey's Black Bottom) exposes Anthony to the horrific true story behind Candyman. Anxious to maintain his status in the Chicago art world, and spurred on by his white art dealer, Anthony begins to explore these macabre details in his studio as fresh inspiration for paintings, unknowingly opening a door to a complex past that unravels his own sanity and unleashes a terrifying wave of violence that puts him on a collision course with destiny.

Read this next: Candyman: Everything You Need To Know From The Original Before You Watch The New Movie