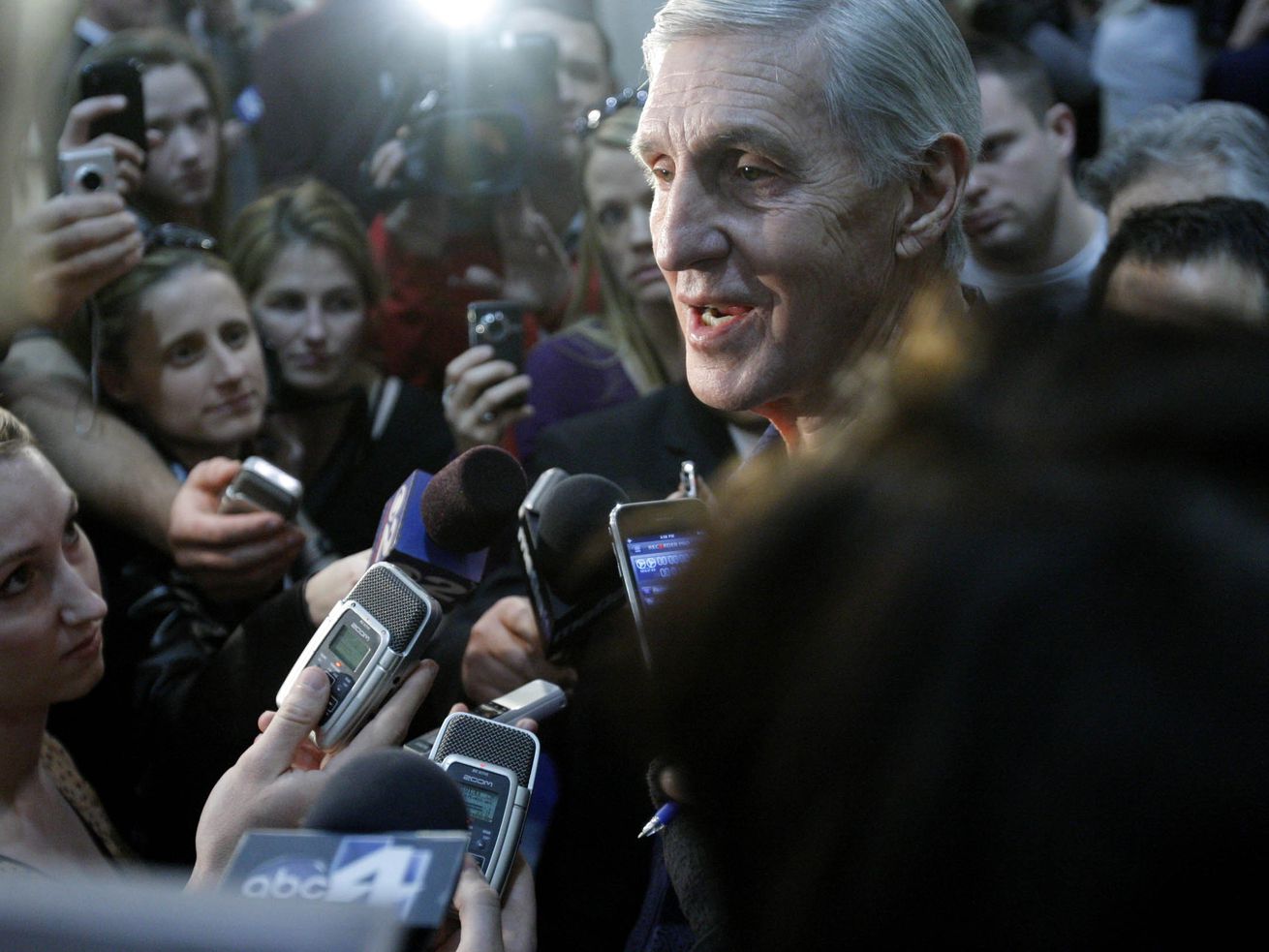 SALT LAKE CITY — During my four decades as a sportswriter, I was never the full-time beat writer for the Utah Jazz, although I used to cover a lot of Jazz games back in the 1990s and beyond when Jerry Sloan was the coach.

Of the hundreds of coaches I’ve interviewed over the years, I’ll admit a few were intimidating, including Rick Majerus at times and Gregg Popovich all the time. But I never felt that way about Sloan, despite his gruff, no-nonsense manner. I liked the fact that Sloan was always straightforward with you and the way he was unpretentious to a fault. That sentiment has been echoed by many in the days since Sloan passed away late last week.

“Jerry’s tenacity on the court was one thing, he was was forceful front and center, but behind the scenes was a compassionate person, with empathy for the players and what they were going through.” — Gordie Chiesa, a former Jerry Sloan assistant

I used to see Sloan up close back in the day when the media would travel with the team, taking the same flights, sharing the same bus and staying in the same hotels. In those days you got to know the players on a more personal basis, although Sloan not so much. He had his regular seat at the front of the bus, his assistant coaches right behind him, then the trainer, then Hot Rod Hundley, followed by the writers and finally the players, who would spread out over the back half of the bus. So while the players might shoot the breeze with the writers at times, Sloan was alone at the front and would usually just talk to his assistants.

Sloan didn’t relish speaking with the media, but he would always take the time to talk when requested. He understood we had a job to do and was always accommodating. On road trips, we would often stop to do interviews in hotel lobbies and Sloan took as much time as you needed.

One time after a game against the Lakers in Los Angeles, we were checking out of our hotel in Marina del Rey and I was waiting in line behind someone in the Jazz party. After I paid my bill and walked out the front door, I could see the Jazz team bus pulling away. I imagined Sloan tapping the bus driver on the shoulder and saying, ‘Let’s go, we’re not waiting for the Deseret News guy.’ But I couldn’t have been more wrong. After finding my way down to LAX and meeting up with the team at the airport gate, Sloan was quick to greet me and apologize for accidentally leaving me behind.

“He was very compassionate,” said Gordie Chiesa, a Sloan assistant in Utah for 16 years. “Jerry’s tenacity on the court was one thing, he was was forceful front and center, but behind the scenes was a compassionate person, with empathy for the players and what they were going through.”

One thing many people don’t know about Sloan is that he was a collector. Not like the people you see on “Hoarders,” but more like the guys on “American Pickers” with barns full of old relics. Sloan is famous for his collection of 70 tractors, which he sold soon after his retirement from the Jazz in 2011. He also had quite a collection of antiques, including pottery, road signs, toys, old clocks and furniture.

“In the offseason, he was up early on a Saturday morning at 7 o’clock going to yard sales,” Chiesa said. “Coaching in the NBA is so intense, but sometimes when we were on the road, maybe in an off-hour, Jerry would walk down the street and discover some sort of used thing he wanted to buy.”

I’ll never forget the time a neighbor was having a yard sale near my home on the east side of Salt Lake City and who should show up one Saturday morning, but Jerry Sloan, wearing a John Deere hat, if I remember correctly. He was just a regular guy looking for a good deal.

“I like tractor and farming magazines and I also read a lot of antique books,” Sloan told the Deseret News in 2006. “I love that. That’s what I’ve done since coach (Dick) Motta coached me in Chicago. He said I need to get a hobby outside of basketball.”

After every season, Sloan used to return to his farm in McLeansboro, Illinois. He liked nothing more than to piddle around his farm doing chores. Frank Layden once said of Sloan, “He’s a farmer. He gets up in the morning and says let’s get the job done.”

It wasn’t surprising when after resigning from the Jazz in 2011, Sloan’s name came up in connection with various coaching jobs, including Golden State, Minnesota, Orlando and Charlotte.

In fact, one of the last conversations I had with Sloan came eight years ago this month when it was my task to track him down to ask about his interest in those jobs in Orlando and Charlotte.

He was back on his farm in Illinois and when he answered his cellphone it sounded like he was a long way from civilization, which I guess he was. When I asked him about the coaching jobs, it was pure Jerry Sloan.

“I can’t talk right now because I’m trying to hook up my sprinklers,” he said bluntly. I could picture Sloan, lying on the ground with an old flip phone, wedged up against his ear while he worked on his sprinklers.

“Jerry was always the same person. He was always intense, but so compassionate and steady in his decision-making. He was real, and able to connect with people. Jerry was common-folk and that’s absolutely a compliment.” — Gordie Chiesa, on Jerry Sloan

Over the years I had gotten used to asking various coaches, most notably Majerus, about their flirtations with various jobs and never getting a straight answer.

But Sloan was never into playing games. Instead of totally blowing me off, he took a minute to address the issue, saying, “I’ve thought about getting back into coaching. But there has to be an opportunity and right now I don’t have any offers. We’ll just have to wait and see what goes on.”

Nothing ever did go on and Sloan never got back into coaching. After staying away for awhile, Sloan came back and did some consulting with the Jazz organization and became a regular at Jazz games until he got too sick to attend any more. It was only fitting that he stayed a Jazzman to the end after spending three decades with the organization.

Let’s give Chiesa the last word on Sloan.

“Jerry was always the same person. He was always intense, but so compassionate and steady in his decision-making. He was real, and able to connect with people. Jerry was common-folk and that’s absolutely a compliment.”