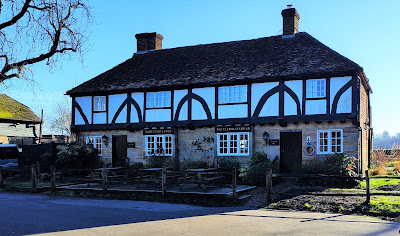 Fridayscarefully scheduled trip out to the Kent-Sussex border, went according to plan, on a mid-January day that was blessed with to wall-to-wall sunshine. The plan had been to spend some time as the rarely visited Elephant’s Head, in the tiny hamlet of Hook Green. 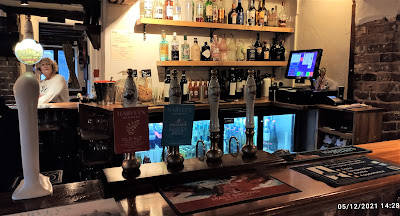 This lovely old country pub that dates from the 15th Century, is difficult to reach without a car, but after driving there a couple of months ago, I came up with a plan to get there using public transport. Everything hinged around the 256 bus, which operates a limited service between Tunbridge Wells and Wadhurst.Research indicated that getting to Hook Green by bus was quite feasible, but was it possible to visit any other pubs along the route? 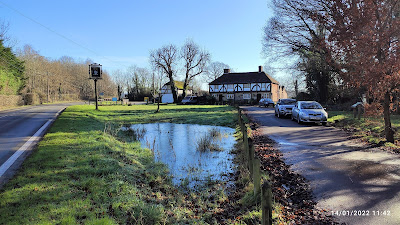 As it happened, the answer was yes, so I looked at perhaps first spending some time at the Old Vine, in Cousley Wood; an attractive but rather upmarket pub close to Bewl Water, between the villages of Lamberhurst and Wadhurst. There were various options, one of which was to take the 256 bus from Tunbridge Wells to Cousley Wood, spend 75 minutes at the Old Vine, before catching the next bus to Hook Green. 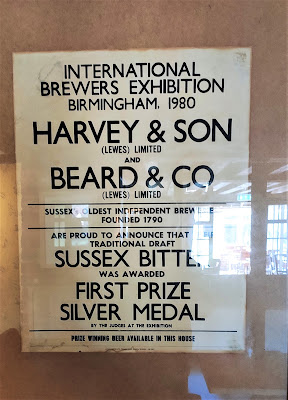 This would have worked but, as it entailed spending three and a half hours at the Elephant’s Head, I decided that would be rather too long to spend on my own in the pub. It would have been fine with a friend for company, or as part of a group, but was too long a period with no one to talk to, apart from perhaps the bar staff.

Another possibility was to take the next 256 service to Wadhurst, and then walk the mile and a half down the hill, to the Wadhurst station, and the train back to Tonbridge. This would only have knocked 30 minutes off the time in the Elephant’s Head, so I reluctantly ditched that particular plan, until I can persuade a group of friends to join me on a visit to the two pubs.

My outward journey to Hook Green, involved three buses – two to get to Tunbridge Wells,and then the aforementioned No. 256. To get all geeky for a moment, the first two buses were operated by Arriva, who are the major service provider in mid and west Kent. The bus out, into the sticks, was provided by Autocar, an independent operator. 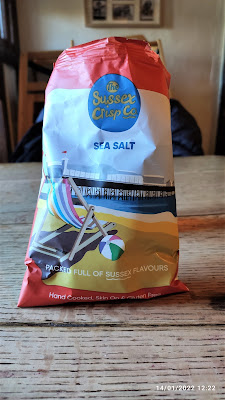 I boarded the bus at the War Memorial in Tunbridge Wells, allowing a rather boisterous group of old girls to get on first. They were obviously regulars on this service, as was the driver, whom they seemed to know by name. The bus also picked up some more shoppers, from outside the town’s main Sainsbury’s, on the site of the old West Station. We then headed out towards Frant and Bells Yew Green, where the majority of this lively group got off.

A lengthy stretch of largely straight road then followed. Its official name is Bayham Road, but it is known locally as the "Bayham Straight." Back in the early 90’s,when I worked in Lamberhurst at Crown Chemicals, it was a favourite stretch of road with some of the boy racers, who worked in the production department. Thankfully I never accepted a lift from any of those petrol heads, although to be fair, I don’t recall any of them being involved in an accident, despite their “need for speed!”

The majority of the Bayham Straight is through woodland, and on the return journey I noticed through the trees, a large group of deer, grazing in a clearing. Their presence was another reminder of the folly of speeding along rural roads. 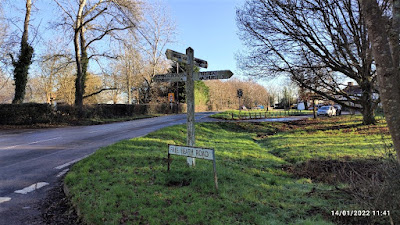 As the bus emerged from the trees, I could see the Elephants Head, straight ahead, and just to the right of the road. It was time to push the bell and get the driver to stop. There is an official stop, on both sides of the road, (Clay Hill Road), a hundred yards or so from the pub, so after thanking the driver and stepping off the bus, I crossed the road and made my way towards it. The pub didn’t open until midday, so with 20 minutes to kill, I went for short walk along the nearby Free Heath Road. This was part of the route some friends and I had walked along, from Wadhurst station, on a previous visit to the Elephants Head, eleven years previously.

Making my back to the pub, I heard the sound of the door being unlocked, and despite me not liking to be the first person through the door after opening, I stepped inside. After the bright sunlight outside, it seemed quite dingy as I entered the bar, although my eyes quickly adjusted to the dimly lit surroundings. I was the first customer, but despite my initial hesitance was greeted with a friendly welcome by the young girl behind the bar. 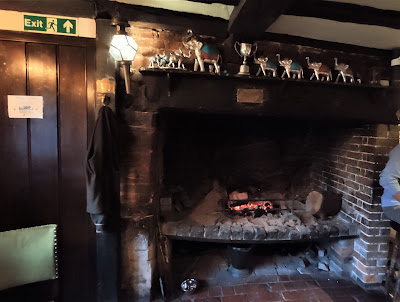 Although Harvey’s Best and Old Ale had been the beers on my previous visit, at the beginning of December, the latter was not on tap on this occasion, but fortunately Sussex Best was available. I ordered myself a pint, had a brief chat with the barmaid, which was mainly along the lines that I wasn’t planning to dine at the pub that lunchtime.

I grabbed my pint and walked over to the “snug” area at the far right of the pub from where, partially hidden behind the fireplace and chimney stack, I could witness the various comings and goings. Not long after, the barmaid came over and started setting one of the tables up for dining. I asked whether the area I was sat in was reserved, but only one of the tables had been booked. She told me that particular snug area was popular with diners, so I said that regardless of bookings, I would move. 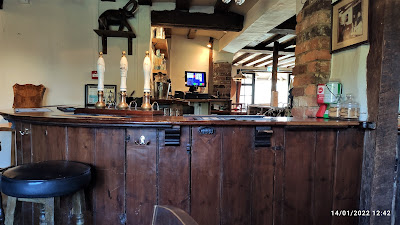 My reason for moving was simple; it was a little chilly in the snug, whereas nearer to the bar, the landlord had got the fire going, and it was blazing away nicely in the unusual, raised grate. There’s something quite hypnotic in staring at an open fire – we’ve got one at home, in the form of a log burner, although Mrs PBT’s seems reluctant to light it – something to do with “hot flushes!” 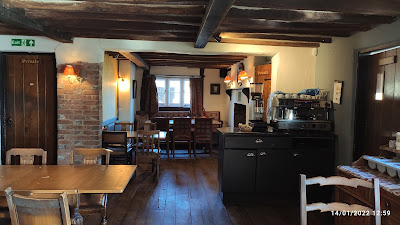 Another pint was called for – Sussex Best again, and meanwhile the number of customers in the pub, had started to increase. First there was the two “ladies that lunch,” followed by two separate couples. This did lead to a couple more pints of Best being pulled, although with a shortage of serious beer drinkers, I can see why the second Harvey’s cask offering had been dropped. 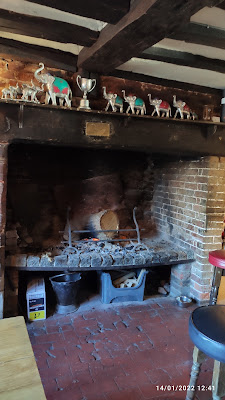 Sitting on my own in that small middle section, close to the fire and the bar counter, I could see clear evidence that this part of the Elephant’s Head, was probably the least altered. I shan’t repeat what I wrote about the pub’s history, in the previous article, and based on the memory of that first visit, 40 years ago, it’s difficult to remember the layout of the interior, back when it belonged to the Bayham Estate. The floor though, is one or worn bricks, unlike the newer-looking timber floor in the main part of the pub. Likewise, the planked, construction of the bar counter appears far more original than the main brick-built one to the right.

Leaving these thoughts aside, it was time to finish my pint, get my coat on, and head back out to the bus stop. I allowed plenty of time just in case the bus was running ahead of time, but as it happened it was more or less on schedule – much to my relief. Apart from me, there was only one other passenger on board the bus, but that didn’t distract from the journey back to Tunbridge Wells.

I alighted at the top of the town. It was 2.10pm and there was another pub to visit, along with a planned call in at Fuggles new bottle shop. First there was the more pressing requirement for a pee, plus a cup of coffee, so I will detail the rest of the afternoon in the next post.